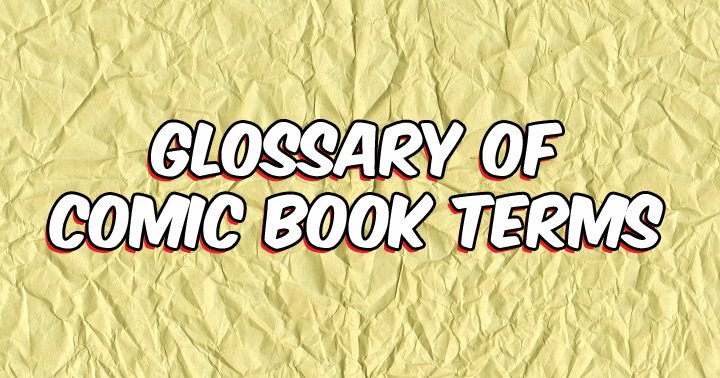 When talking to comic book fans it can sometimes feel like they are speaking another language. Trade paperback? Variant cover? Retcon? Splash page? It can all get a bit confusing for someone new to comic books. This Glossary of Comic Book Terms aims to help those unfamiliar with the comic book lingo so that they can join in the conversation.

Single Issue – This is the serial magazine-style format of a comic. Generally, 20-32 pages of a story but sometimes can be more, with some being up to 100 pages. These are generally numbered in chronological order eg. Issue #5.

Ashcan – These are comics that are made as a prototype for a upcoming comic. These are often given away at conventions or events as promotional materials.

Prestige Edition – These are comics that are generally 48-64 pages long that have a thin spine.

Digital Comics – Editions of comics that can be viewed on computer screens, tablets or mobile phones.

Digital First – This is where a comic is released in a digital format first then later in print.

Collected Edition – This is where multiple single issues are collected to create a whole story or set of stories, often collecting 5-6 single issues.

There are many kinds of collected editions including…

Variant Cover – A variant cover is an alternative cover of a single issue. Most of the time it includes the art of a different artist and are often fewer of these available. More information on variant covers.

Limited Series/Mini-series – This is a comic series that has a set number of issues. Most commonly it is 6 issues but it will often vary depending on the story. The series has a beginning, middle and an end.

Annual – An over-sized special of a comic book that is released in addition to the regular comics in that series.

One-shot – A story that is contained to a single issue.

Webcomic – Comics that are made for viewing on the Internet  This could be in a comic strip format or as an on-going narrative.

Mini-comic – A comic that is smaller than the conventional comic book size. Generally, these comics are handmade with a DIY ethos and have small print runs.

Floppies – A slang term for the single issue comic. Called so as it is used with floppy paper.

I don’t really go into the collecting side of comics on this website, but if you’re looking to purchase comics online then it is good to know what these terms mean.

Mint Condition – The comic is perfect in every way and has no damage or blemishes.

Near Mint (NM) – It is very close to perfect.

Very Fine (VF) – It is close to mint but will have very minor damages or blemishes.

Fine (FN) – Has some wear but that is more noticeable than a Very Fine copy.

Good – Has a lot of wear but is still okay for reading.

Key Issue – A often very collectable comic. Key issues tend to have events in them – such as first appearances or deaths – and are high in demand on the secondary market (eg, eBay or at auction)

Heritage Auctions has a great guide and more detail on these terms and how they align to a score out of 10.

Panel – A panel is one of the boxes on the page of a comic book.

Splash Page – When a panel consists of the entire page.

Two Page Spread – When the comic book art spills over into two pages.

Manga – Japanese comics. These comics are read right to left, opposed to left to right like western comics. Discover more about Manga.

Manhwa – Comics that originate from Korea.

Anthology – These are comics that contain multiple short stories from multiple creators. One of the most successful of the format is 2000AD.

Zero Issue – Usually an issue set before issue #1 that acts as a prelude to the main series.

Gutter – The empty space between panels.

Creator-Owned – This means the creator owns the work that they create. This also means that the publisher doesn’t own the rights to the characters or story but just the right to publish it. On of the most successful creator-owned comics in recent times is The Walking Dead.

Solicitations – A block of text, generally accompanied with cover images, which details upcoming comic book releases that have been supplied by the publisher. I go into greater detail on comic book solicitations here.

Indie – Generally referring to an independent publisher who publishes comics independently from a large corporate entity.

Continuity – This is where a comic book’s narrative has a past which might also be shared within a universe of a vast array of other comic books. The majority of Marvel and DC Comics‘ comics involve continuity in one way or another. This allows characters like Batman and Superman to exist in the same universe.

Retcon – Short for “Retroactive Continuity”. This is when a past event in a shared universe or a character’s past is changed retroactively. This can be done to add new elements to an existing story that allows for future stories. It could also be used to update a character eg: originally Tony Stark (Iron Man) was wounded in Vietnam but Marvel comics retconned this and now it is in Afghanistan.

Crossover – This is when story elements of two or more comic books come together to create one storyline across multiple titles.

Event – This is a crossover story on a generally larger scale than normal. Often these events include many more comic book characters from a shared universe coming together. Also, the outcome of the storyline often affects on-going titles for months and sometimes years to come. Find out more about event comics.

Pre-Crisis/Post-Crisis – This refers to a period in DC Comics’ history set either before (pre) or after (post) a comic called Crisis on Infinite Earths, which was released in 1985-6. Without going into too much detail, Crisis on Infinite Earths acted as a big housecleaning for DC continuity with parallel universes disappearing and characters getting modern updates. Many comics fans use the term Pre/Post-Crisis as a way to describe characters and stories on either side of this story as due to the big changes that it created.

Pre-Flashpoint – This refers to DC comics between the 1986 and 2011 before the Flashpoint storyline. The conclusion of Flashpoint allowed for some housecleaning of DC Comics continuity and paved the way for the New 52 era.

New 52 – This is the era of DC Comics between 2011-2015 in which DC Comics did a soft reboot of their whole line. All of the comics went back to issue #1 and there were many changes done to their histories. Some franchises had more changes than others. Superman and Wonder Woman had many changes made why Batman and Green Lantern left relatively untouched.

Back-issue – A previous issue of a single comic. Back issues are a month or older and not the latest issue.

Back-up Feature – This is a short story in the back of another comic book. Often these will feature a secondary story of the character, a new character that the publisher is testing the water with, or a character who isn’t popular enough to warrant their own series.

The Big Two – This a term used to refer to Marvel and DC Comics. Used as they’re the two publishers with the largest market share.

LCS – An acronym for Local Comics Store/Shop. This acronym is often used in comics journalism.

Run – This is a number of consecutively published comics of a series by a writer and/or artist. For instance, Stan Lee and Jack Kirby’s run on Fantastic Four lasted 100 issues.

Off-Panel – It’s the things that happened between the comic panels which the reader didn’t see. It’s the comics version to the movie term off-screen.

Story Arc – An extended or continuing storyline that spreads over multiple issues or smaller stories of a comic book. Can also be known as a narrative arc.

Diamond – This is the shorthand name for the Diamond Comics Distributor. Diamond is the major distributor of comic books and graphic novels.

If you believe that I am missing any terms feel free to let me know and I will add them to the list.