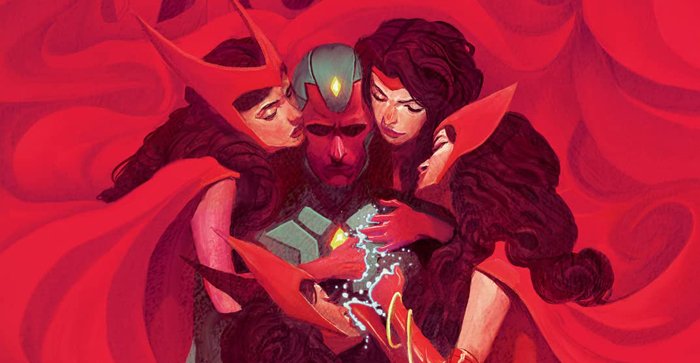 In the process of doing research for the Scarlet Witch and Vision lists, there were many stories where the couple equally shared the spotlight. As a result, these stories were worth pointing out but didn’t have a home. Hence this list was created.

Just like WandaVision, these comic book stories focus on Scarlet Witch and Vision evenly. Many of these focus on their relationship, but with plenty of superhero action on the side too. If you’re digging the Disney+ series, then you’ll find something to enjoy in these comics.

… Let All Men Bring Together

Want to know how Scarlet Witch and Vision got married? Well, this giant-sized has that answer. Although, before they can get there, they’ll have to face down the dreaded Dormammu!

There is a nice moment between the couple when Vision proposes. It’s only a page, but there is a sweetness and a joyful enthusiasm, which you don’t get in superhero comics all that often.

Just a bit of warning, this issue is the final part of the Celestial Madonna Saga, a long and weird Avengers take from the 70s. Elements of this issue won’t make a lot of sense if you haven’t read it, but the Scarlet Witch and Vision parts are self-contained enough to enjoy on their own.

BONUS PICK: If you want to see Scarlet Witch and Vision on their honeymoon, check out Avengers #137-139. It’s only a few panels per issue, though.

What I like about this story is the collision of domestic and superhero life. In most tales, the couple’s interactions are in the context of being in the Avengers. There’s nothing domestic about them. In this story, we see a glimpse of them being an actual married couple. They’re moving into a home of their own, unpacking boxes, and having private conversations.

There’s plenty of superhero action as well. It also happens to be Halloween, with the pair will take on some possessed trick or treaters.

BONUS PICKS: Vision and the Scarlet Witch (1982 series) is a four-issue miniseries, made up of four stories. If you like this one, check out the rest. It is worth noting that the remaining three issues tie-up a lot of loose threads of earlier Scarlet Witch and Vision stories in Avengers.

Another pick that’s more about Scarlet Witch and Vision’s relationship than super-heroics.

As the cover reveals, this is the issue where we find out that Wanda is pregnant. It’s in these moments where the mutant witch and synthezoid are like a regular couple. It’s a happy moment between two people and the highlight of the issue.

A lot of these moments are elevated by Howell’s art. His characters are expressive, showing close affection with one another. The joy on their faces is infectious and a rare sight in superhero comics.

In other events of note, the couple moves into a new home. Although, middle-aged bigots don’t like the idea of the pair living in their neighbourhood and try to do something drastic.

I Too Shall Be Save By Love

Situated in the middle of Tom King’s critically acclaimed series, this issue steps back from what’s happening to do a retrospective of Vision and Scarlet Witch’s relationship.

It’s a crash course in the ups and downs of their complicated relationship. While this could easily be a dump of events onto the page, King forms a narrative to create a much larger picture.

Walsh’s art is rich with emotions, which helps reinforce different points in time. This covers a wide range from the giddiness of young love, the rage of arguments, to cold neutrality.