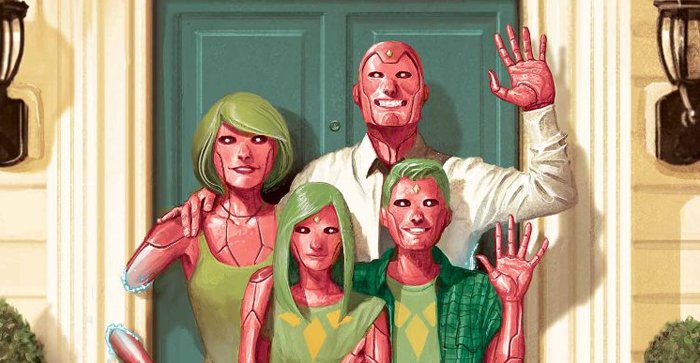 The Vision stands out as one of the most unique in Marvel’s catalogue of characters. While he may appear to be a robot, he’s much more than that. In fact, he’s a sythezoid with synthetic organs and tissue to mimic a human as a close as possible. Many times he has straddled the line between android and human. This has resulted in a range of human emotions and holding long-term relationships.

Looking for Vision comic book stories to read after seeing WandaVision? Well, you’ve come to the right place. This list is a mix of milestone moments, cult-favourites, and critically acclaimed tales will feed that reading appetite.

Disclaimer: Similar to the Scarlet Witch list, I’m excluding stories where Vision has equal billing with Wanda. Check out this list for those stories.

Want to know where Vision got his start? Then this is the comic you will want to read. It’s a quite simple but effective tale in which the villainous Ultron-5 creates Vision to defeat the Avengers by proxy. Although, seeing the error of his ways, Vision sides with the heroes to defeat his creator.

The comic leaves some details of his origin up in the air, but don’t worry, all will be revealed in the next selection.

Even An Android Can Cry

In his first appearance, (see previous selection) it was revealed that Vision was created by Ultron-5. This tale goes a bit deeper into his origin to find out more of the specifics, the things that Vision needs answers to find out who he is and piece together his identity. How was his synthetic body created? Where did his personality come from?

By the end, these answers and more are revealed. While they come off a little bit convoluted, in a way that only superhero comics can pull off, where it all ties together is in the final page. It’s a full-page splash of Vision, overcome with emotions, as he reacts to discovering the answers he was seeking. It’s a powerful image.

This is also the story in which Vision joins the Avengers. This story would commence his membership on the team and cement him as a long-time member for many years to come.

I’m referring to this as a saga as it stretches over many stories as the main focus or a subplot.

It all begins when Vision is rendered inert after a battle with Annihilus. He’s eventually fixed with the help of Titan’s supercomputer but begins to act strangely afterwards. After a lot of build-up, what eventuates is Vision doing a heel turn in which he gains control of all of the world’s networks.

What makes this an interesting story is seeing how Vision reacts to the pressures of life and responsibility. Whether it be the pressures of leadership, a good husband, or a hero, these are very human concerns – even if they were addressed in a very android manner.

In this 4-parter, Vision goes on a quest to explain the weird dreams that he has been experiencing lately. Although, he soon learns these mysterious dreams have a sinister purpose.

Harris and Clark use the robotic hero to explore identity. What does it mean to be human? And is it possible for a being like Vision?

King’s critically and fan acclaimed 12-issue limited series put him on the map and won multiple Eisner awards. If you only read one Vision story, then you should make sure that it’s this one.

In many ways, it has the makings of a Shakespearean tragedy, albeit one that features robots in suburbia. Vision, attempting to be more human, creates himself a family and moves into the suburbs. Although, after a series of unfortunate events, that idealised life begins to crumble away.

There’s a constant sense of tension that underpins the narrative. The narration plays a big part in this. It often warns the reader that something terrible will happen, never reveals when. Another contributing factor is King exploring the fear of the unknown. In the beginning, it comes from the neighbourhood who are fearful of robots living among them. But in turn, the family also afraid of the potential harm that could befall them for being different.

Single Issues: The Vision (2015 series) #1-12
Trade Paperbacks: Vision Volume 1: A Little Worse Than A Man and Vision Volume 2: A Little Better Than A Beast or Vision: The Complete Collection
Buy: Comixology | eBay