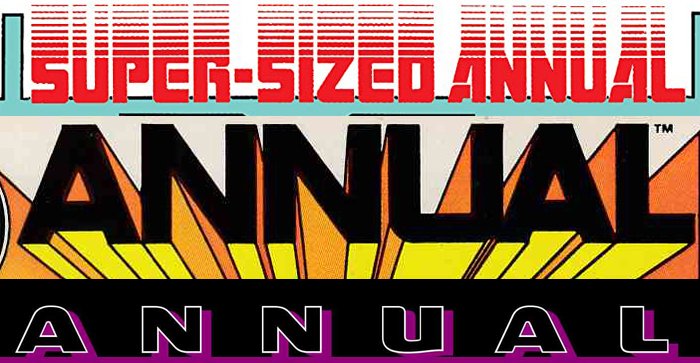 Comic books tend to have a rhythm with their release schedule, whether it be fortnightly, monthly, bi-monthly, or something in between. Although, there are certain circumstances where a publisher has a hole in their schedules and needs to fill it with something. While there are all kinds of creative ways this can be done, the strategy that has worked the best is the comic book annual.

But what are annuals? Read on to find out all about them, including their structure, the kinds of stories they tell, and heaps more.

So, what are annuals?

Annuals are extra-page specials of popular comic book series. These comics are usually double, triple, or sometimes even larger than your regular comic book and, as the name suggests, are released once a year.

From a business stand-point, they’re made to fill holes in a publishing schedule that are usually created when a fifth release day falls in a month. Instead of publishing nothing that particular week or shuffling schedules around to accommodate, a popular series or character will get an annual special.

For fans, this means they get an extra issue of their favourite series in a year. In many ways, the annual is a special thirteenth issue of a monthly comic book series.

Instead of assigning an issue number, some publishers will use the year of release instead. For instance, when IDW published a TMNT annual earlier this year, it was the Teenage Mutant Ninja Turtles Annual 2020.

Which comics get annuals?

While it depends of the publishing strategy of the publisher, the rule of thumb tends to be that the comics that get annuals are the ones which are either top or mid-sellers. These comics feature characters that have a large enough fanbase who are who are willing to buy the additional comic to make it worth the publisher’s time.

On occasion, a publisher will release an annual for a character who doesn’t have their own series at present. These annuals are often used to test the water and see if there’s reader demand for a particular character to get an ongoing series.

Some examples of publishers that have a history of publishing annuals include:

What type of annuals are there?

The most common kind of annuals are the ones that contain standalone stories. This could be one self-contained story that accommodates the extra page-count or perhaps a handful of shorter ones. A lot of the time, you don’t need intimate knowledge of what’s going on in the regular comic book series to understand them.

These kinds of stories are often a breeding ground for up-and-coming creators. It’s an opportunity for their work to be exposed to readers and get a foot in the door at the publisher.

Annuals can also be used as a way to tell stories that don’t fit into the regular series. The creators might have an idea, but to tell it may deviate from the regular plan. Other times, it’s a story that too big for the space that’s usually allocated such.

Sometimes, there will be a theme behind the annuals a publisher releases in a particular month or year. Marvel did this last year with their Acts of Evil annuals and DC did themed annuals throughout the 90s such as Elseworlds, Year One, and Pulp Heroes.

Some examples of standalone annuals that are well-regarded are:

You don’t see the crossover annual much any more, but back in the late 80s and early 90s, they were all the rage at Marvel. The idea was that a big story would begin in one annual and then continue into another and so on until it was complete.

These stories were like baton relays, where a character or team would face a threat then it would be passed over to the next comic. Each of these annuals can be read on their own, with a self-contained element, but there’s a through-line if you read all of the annual in order.

Some of these crossover annuals were quite large and incorporated a broad set of characters. The smaller ones tended to be franchise-specific, including only X-Men or Avengers annuals.

Some notable crossover annuals include:

These annuals are similar to the above mentioned annual crossovers but how they differ is in how they relate to the other chapters that surround them. These annuals are not self-contained in nature and are a core chapter in the much larger story. You can’t really jump into these cold as you will have missed what has come before.

These kinds of annuals are not common, but DC Comics used annuals this way for a few of their Green Lantern crossover events during the New 52 era.

A few crossovers which used annuals in this fashion include:

What’s your opinion on annuals?