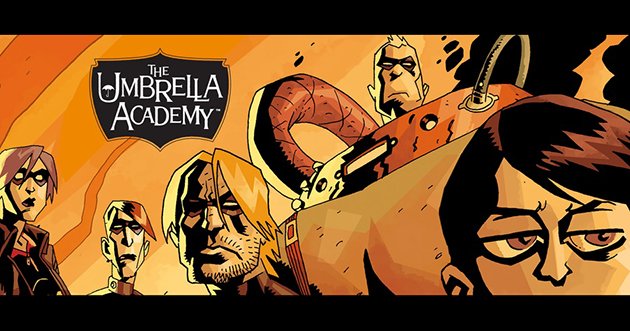 In one remarkable moment, forty-three extraordinary children, with mothers showing no signs of pregnancy, were born simultaneously. Millionaire genius Reginald Hargreeves adopted seven of them and formed a superhero team, who later became a dysfunctional family, to save the world from all kinds of bizarre threats.

This is the basis of Gerard Way and Gabriel Ba’s The Umbrella Academy, the Dark Horse series which delves into the weird side of superhero comics. The comic’s unique take on the genre has garnered it plenty of fans, critical acclaimed, a Netflix series, and an Eisner Award.

If you love Netflix series and want to read the comic books it’s based then you’re in the right place. This guide will point you to the perfect place to start reading as well as a reading order so you can continue reading the weird and dysfunctional adventures.

Quicklink: How Do I Start Reading Comics? The Simple Guide For New Readers

Where Do I Start?

While it might sound obvious, it’s best to start Umbrella Academy at the very beginning. But with Umbrella Academy broken up into multiple miniseries*, each with their own #1 issue, it’s not as easy to figure out which one you should be reading first.

The answer to this is Umbrella Academy: The Apocalyse Suite #1. Follow this miniseries through to the end before jumping on to the next one.

Check out the next section to find out the recommended reading order for Umbrella Academy.

*This allows the creators to release Umbrella Academy at their own pace and not have to worry about making sure they have a comic released each month.

So you want to read all of Umbrella Academy, or at least what’s available so far? These are the trade paperbacks you’ll need to check out and the order to read them in:

All of these collections are also available in Library Edition format. These editions are over-sized hardcovers that look rather nice on the bookshelf.

Umbrella Academy is set up in a way where there is a wealth of spin-offs that they could do. At the moment there are two, but there will likely be more to come.

This is a Christmas themed one-shot featuring Hazel and Cha Cha.

You Look Like Death: Tales From Umbrella Academy
Written by Gerard Way and Shawn Simon. Art by I.N.J. Culbard.

You Look Like Death is a six-issue miniseries which focuses on The Séance (aka Number Four) and is set ten years before The Apocalypse Suite. The first issue dropped on September 16th (originally June but was delayed by COVID-19) and subsequent issues will be released monthly. The New York Times has more information on this spin-off.

Will there be more Umbrella Academy?

There sure will be! Gerard Way and Gabriel Bá mentioned in an interview with Collider that they have long-term plans for the comic book series which should see eight series in total.

When we will get there is a whole other story. With My Chemical Romance reforming, we might be in for big gaps between miniseries yet again. That being said, the first two miniseries were written while Gerard was on tour so we’ll have to wait and see!

Where Can I Buy Umbrella Academy?

Will you be reading The Umbrella Academy comics? Let me know in the comments below or via Facebook or Twitter.