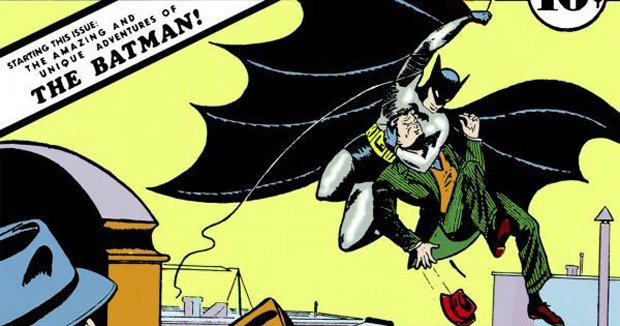 As part of How to Love Comics’ year-long celebration of Batman’s 80th anniversary, I’ll be exploring Batman comics from all different angles. To kick it all off there’s no better place to start than the beginning – Batman’s first appearance. In order to do this, we’re going to travel back to 1939 for a story called ‘The Case of the Chemical Syndicate’ in Detective Comics #27 – written by the not-credited enough Bill Finger and art by Bob Kane.

Through this exploration, we’ll take a look at what Batman was like in his first appearance. What elements of Batman were there from the beginning and how does he compare against the Batman of today? Read on to find out!

While it’s only a total of 6 pages, there’s plenty to unpack and discuss – even in the first panel.

First off, The Bat-Man? It’s weird to see the hyphenation. We’re so used to seeing it as all one word. While hyphenation might have stuck for Spider-Man, but for Batman, the hyphenation didn’t last and was ditched by Detective Comics #30.

Although, confusingly, on the cover it’s ‘Batman’. I guess they couldn’t make up their mind in the early days.

But there are elements in that first panel that are closer to the Batman we all know. For instance, the first time we see Batman he’s draped in darkness with his cape extended into the well-known bat shape.

In the context of today, we know this is to appear frightening to evil-doers, and there is an element of that in this comic too, but there’s the additional fact that that has to be taken into consideration in the context of reading this in 1939. Readers had no idea what Batman’s deal was. Based on that shadowy figure and an accompanying description all readers of 1939 knew about him at this stage was that his he is a “mysterious and figure” and that he was a good guy.

Moving forward from this we are introduced to two men that are very familiar to Batman lore. Bruce Wayne and Commissioner Gordon. They’re just hanging out having a smoke, when Gordon receives a telephone call. There’s been a murder! In a move that screams professionalism, Gordon decides to invite his “young socialite friend” to tag along with him to the scene of the crime. Bruce agrees, saying matter-of-factly “Oh well, nothing else to do, might as well.”

So off they rush to the scene of the crime to find that the police on site are questioning the victim’s son, who is the major suspect of the murder. Gordon questions him, until one of the victim’s business partners calls up and says that he heard about the murder and reveals that he has received threatening phone calls. So the police, know the son was probably not the culprit race off to the caller’s location. Bruce Wayne has decided he’s had enough and thinks it’s time to go home.

But the police will be too late. The business partner has already been murdered, with the killer and an accomplice fleeing the scene of the crime. As they attempt their escape via the roof there’s someone there to meet them – Batman!

It’s already halfway through the story but we finally get to see him and his costume in this first appearance isn’t too dissimilar to that of today. It’s grey and white, just like today, and has all the same elements too such as a cape, cowl, utility belt, and bat symbol on the chest. There are even the ears, although in this instance they stick out the side of the head instead of from the top.

A proto-Batmobile makes an appearance, but it’s not what you think it is. If you looking to see an elaborate black car with all kinds of features then you’re going to be disappointed. This is Batman is a simple civilian car. Also it’s red! Not very Batmobile at all.

While I won’t go through the entire story blow-by-blow – Batman does save the day by finding out the culprit – but there’s one more thing about this story I want to discuss. The reveal of Batman’s secret identity. Batman’s identity is something that is taken for granted today – every reader knows that Bruce Wayne is Batman – but in 1939 this would’ve been a surprise.

Some observant readers would’ve picked up the clues, but I have a feeling that this would’ve been a big surprise for many readers of the time.

So should you read this story? While this 80 year old story isn’t highly original by today’s standards, it’s worth reading as a curiosity. If you’ve ever wanted to Batman’s very first appearance or want to know what Batman was like in the early days then this is the story for you.

If reading an comic doesn’t sound like your kind of thing this story was remade as part of Batman’s 75th anniversary. While it follows the same basic plot, but thanks to modern storytelling techniques writer Brad Meltzer and artist Bryan Hitch have expanded it.

This version digs into Batman’s mind through inner monologue to explore his motivations, something that the original doesn’t go into detail with. It also has the benefit of being 15 pages, 11 more than the original story. Because of that, there’s more room to move with the narrative and give Bryan Hitch room to draw in his widescreen style.

And for fans of Tim Burton’s Batman will enjoy a nod to the movie at the final panel.

Detective Comics #27 is a solid introduction of Batman which introduces the foundation of the character. We can look back at this debut to see many familiar elements of the character and see that even through his evolution over 80 years that most of what we know was present from the very beginning. I wonder what he’ll be like after another 80 years.

Detective Comics #27 has been collected in a variety of collections including Batman: The Golden Age Volume 1, Batman: A Celebration of 75 Years, and the upcoming Detective Comics: 80 Years of Batman. You can also read it for digitally here.

What do you think about Batman’s first appearance? Let me know in the comments below or via Facebook or Twitter.