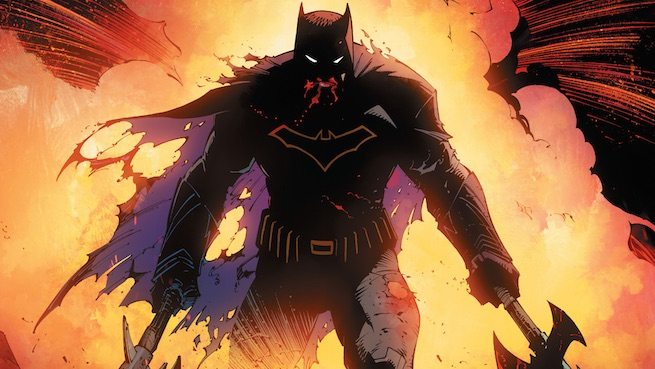 With Dark Nights: Metal, the legendary team of Scott Snyder and Greg Capullo brewed up a bombastic comic book event which was full of crazy ideas. Beginning with with something lurking in the shadows of reality, it quickly escalates into threat of massive proportions which introduces the Batman Who Laughs and the Dark Multiverse in the process. The result is a comic book event which is a lot of fun while also being a cornerstone in in DC Comics continuity.

Big events, especially ones with lots of tie-ins, can be confusing to new readers and veterans alike. To help reading easy I’ve put together the Dark Nights: Metal Reading Order Checklist. Not only does it give the reading order to this massive story, but also tie-ins, creative teams, background reading, and other helpful notes.

Quicklinks: Where Can I Buy Comics? | 6 Best Places To Buy Comics Online

Do I Need To Read The Tie-Ins?

Longer answer: As you’ll see below, there are a hell of a lot of tie-ins for this event. But just because they’re listed there doesn’t mean you need to read them all. They’re totally optional side stories which add a little extra to the main story but shouldn’t be required to get a full story.

Here are a few options you can take when it comes to reading Dark Nights: Metal:

It’s totally up to you on how much you read, based on your enjoyment and interest in the story plus your budget.

Want to read hints and comics which inspired Dark Nights: Metal? Then you should check out these comics.

While not essential reading to understand what’s going on, there are many references to Scott Snyder and Greg Capullo’s Batman run in the preludes. Bleeding Cool has collected some of the scenes that were referenced from their run here. WARNING: There may be spoilers so it’s up to you if you want to be spoiled.

This story from 1990 introduced the Bat-Demon Barbathos (the big bad of Dark Nights: Metal) into the DC mythology.

The Return of Bruce Wayne is a 6-issue miniseries which spins out of Final Crisis #6. This features the other appearance of the Bat-Demon Barbathos.

For those who want to know more about the Hawkman mythology.

Both of these have hints to Dark Nights: Metal.

The following comics act as a prelude to Dark Nights: Metal.

Below is the recommended reading order for this massive comics book event.

The Flash #33 (tie-in – Bats Out Of Hell – Part 1)
Written by Joshua Williamson. Art by Howard Porter.

Spinning Out Of Dark Nights: Metal

Want to know what to read after Dark Nights: Metal? Here are a few comics which will be picking on threads of this massive event.

Fans of The Batman Who Laughs will want to check out The Immortal Men #3, with the character featuring in that issue.

In this new solo series, the first in many years, Hawkman is on a mission to discover the purpose of his many reincarnations.

Events from Dark Nights: Metal will be felt in Atlantis with a story which begins in Aquaman #35.

The Batman Who Laughs #1-7
Written by Scott Snyder. Art by Jock.

If you want to know what’s next for The Batman Who Laughs after Dark Nights: Metal then check out this miniseries.

This is an upcoming sequel to Dark Nights: Metal from the same creative team. Check out the reading order.

For those who prefer to read the who thing in a collected edition(s), here what you’ll need to read.

Will You Be Reading Dark Nights: Metal?

Will you be reading DC’s latest event? Have you found the Dark Nights: Metal Reading Order Checklist helpful? Let me know in the comments below or via Facebook or Twitter.

Have you found this reading order helpful? Share it on social media or with your friends so it can help even more people.