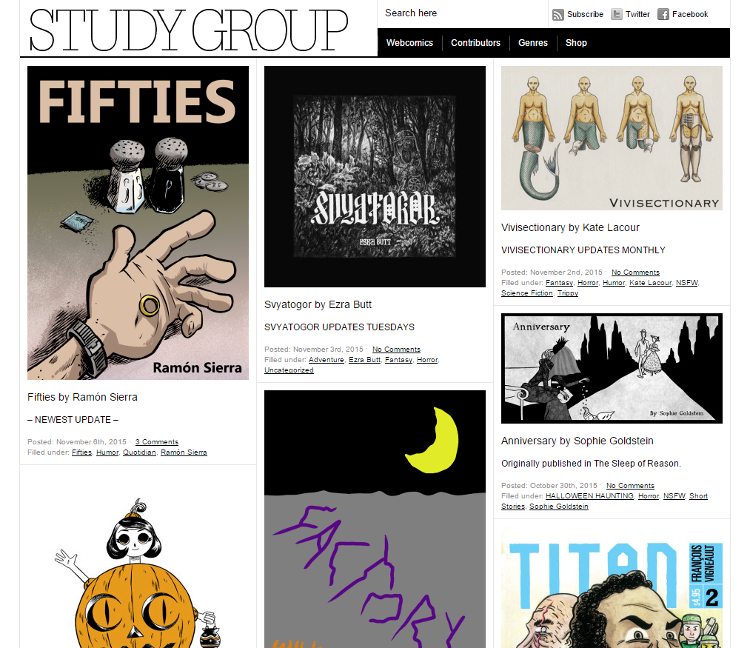 The Internet has a rich tapestry of webcomics waiting for you to discover them. Although, due to the large scale and scope of the Internet it’s easy to miss some quality comics. Right now you are missing on fantastic webcomics just because you might not be looking in the places.

To fix this sad realisation I have put together a list of the 5 best websites for discovering webcomics. I’ve tried to make this list as diverse as possible, giving you access to a wide range of creators, themes, genres, perspectives and ideas. As a result, you should discover tens, or even hundreds, of webcomics for you to follow, binge and enjoy.

Originally starting as a magazine, Study Group Comics is an eclectic webcomics site which hosts one of the most varied group webcomics, styles, stories and creators in the one place. Featuring short stories with serialised ones, Study Group Comics explores ideas and creators you might not see else where, often not afraid of experimenting, as well as more established ones who have made a name for themselves in the indie scene. It’s a platform of free expression and one that shines through it’s quality comics.

Study Group Comics doesn’t have an app but is readable on mobile.

Taptastic is a platform of quality webcomics with a wide range of webcomics, genres and styles and have a focus on supporting creators. Readers can follow, share and discover webcomics through the user features and even have the ability to purchase comics through the premium store, which helps the writers and artists continue to make great comics. And when the creators and afford to make great comics it often shines through and as a result there’s a strong community feeling to the site with a healthy forums and social media.

Tapastic has a apps for both Android and iOS.

Out of all the websites listed here, Tumblr is probably one you are most familiar with, but did you know that there’s a big webcomics community on there? That’s right, Tumblr is more than cats and gifs. Because of the ease of use and the shareability Tumblr has become one of the places to be for a wide range of webcomic creators. As a result, there’s a diverse range of voices, genres and styles just waiting to be discovered.

If you’re already on Tumblr you might’ve seen some of the creative webcomics on there. If you haven’t, tags such as webcomics, webcomic and webcomics on tumblr. You can also try a combination of these tags with your desired genre or theme and you you’ll be able to find something awesome to read. And in the same way that you can follow a Tumblr blog, you can also follow a tag making the discoveries even easier.

Line Webtoon is a webcomics platform that originated in Korea but has since branched out to include webcomics from creators from all over Asia and the West. While there’s definitely an Asian influence to a lot of the comics, Line Webtoon offers a very diverse range of genres, styles and tones. From drama and science fiction to romance and sports, this webcomics platform covers something to appeal to everybody. One of the advantages that the platform has over others is that many of the comics are offered in multiple languages through fan translations, making it a global platform.

Line Webtoon is also very mobile friendly with all of the webcomics made with the intention of being read on mobile or monitor. As a result, the platform has a great app available on both Android and iOS.

Comic Rocket is a bit different to the other websites listed in that it doesn’t host any of the webcomics that it features, but instead works as a handy reading and aggregation tool. Featuring over 40,000 webcomics Comic Rocket gives you access to more webcomics than you could ever dream of and there will be something to cater to everyone’s taste. While that many webcomics can sound a little scary Comic Rocket makes it easy to follow and discover webcomics. They have the ability to follow, bookmark and share your favourite webcomics as well as getting recommendations based on what you’ve been reading.

Unfortunately, the only downside to the website is that it’s not as mobile friendly as you could hope. Luckily, there’s an app for Android.

How do you discover webcomics? Will you be checking out any of these websites? Let me know in the comments below of via Facebook or Twitter.