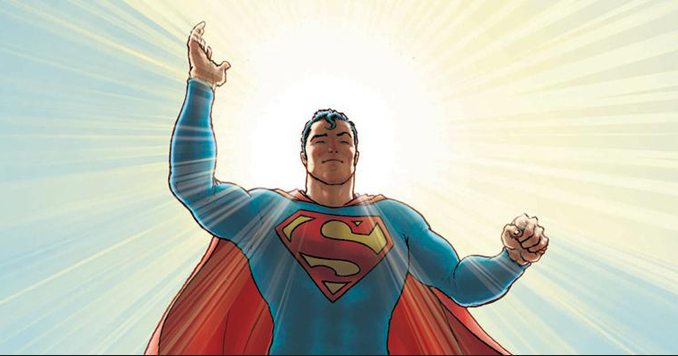 Is it a bird? Is it a plane? No! It’s a Superman reading list!

While many people complain that he’s too powerful, Superman is a well-developed character with a rich mythology. As a result, Superman can be written terribly as some writers are not sure how to handle the characterization or his large set of powers. Although, when written right, he’s is a wonderful character to read – fleshed out with human aspects, great adventure and heroism – making the reader aspire to do good or see the world in a more positive way.

I have put together a selection of 13 Superman stories you should read, many of which achieve that goal, and are seen as some of the very best. Most of these stories are fan favourites and critically acclaimed and explore different interpretations and tones of the Man of Steel while staying true to his core.

Written by Mark Waid and drawn by Leinil Yu.

This is essentially a Superman origin story, although this one takes all of the previous interpretations and combines them in a fascinating manner. not only does it act as an origin story but at the same time as a tribute to the stories of the past.

The Death of Superman

The Death of Superman was a big event storyline that went over all of the Superman titles that where being published all the time. a murderous monster or pure rage known as Doomsday is heading towards Metropolis with the only person who can stop him being Superman. While Superman is able to stop Doomsday he has to give his own life in the process. This story is high drama and when it happened it was a very big deal with it even making the mainstream news.

Funeral for a Friend

Funeral of a Friend is the aftermath story of the Death o superman as the world comes to grips with the Man of Steel’s death. It is a touching story that sees the reaction from everyone in his life from not only the superheroes but also the people of the world. Can the world live without Superman?

Reign of the Supermen

Reign of the Supermen, continuing from The Death of Superman and Funeral for a Friend, shows the rise of four new mysterious Supermen. A man in a steel suit, a clone of Superman, a Cyborg and an energy powered alien. Things take an epic turn when it happens to be that one of them is evil. The story also shows that it is not that easy to kill superman as the original returns to save the day. This tale is huge in scale with some big action heroism. It also guest stars Green Lantern.

Must There be a Superman?

Written by Elliot S! Maggin and drawn by Curt Swan.

Is Superman helping Earth or is he stopping it developing in a way that allows it to fend for itself? That is the question that is raised up in this story by the Guardians of the Universe. The question doesn’t give you an answer, but instead is left up to the reader to decide. This idea has been used many times since but in 1971 was very fresh.

Must There be a Superman? was told in Superman #247 and is collected in trade paperback in Superman: Greatest Stories Ever Told vol. 1.

Written by Grant Morrison and drawn by Frank Quitely.

This is personally my favourite Superman story and one that I tell people to read often.

Written by Kurt Busiek and drawn by Stuart Immonen.

Secret Identity is a very different Superman story in that it focuses more on the Clark Kent aspect of the character. We see how Clark Kent grows up and how he deals with the discovery of his powers and learns the values of the Kents.

What’s So Funny About Truth Justice & The American Way?

Written by Joe Kelly and drawn by Doug Mahnke and Lee Bermejo.

This single issue story takes on the idea that Superman’s value might be out of date in the 21st century. A new superhero teams known as The Elite is introduced who is more popular but does their “heroics” in a manner which causes death and destruction. Mocking Superman and his values they challenge him to a fight, in which Superman shows them that maybe his way of doing things is not so wrong.

What’s So Funny About Truth Justice & The American Way? was told in Action Comics #775 and is collected in trade paperback in Superman: Greatest Stories Ever Told vol. 1.

Superman: For All Seasons

Written by Jeph Loeb and drawn by Tim Sale.

Superman For All Seasons shows a very human side of the Man of Steel with telling done through the perspectives of other characters like Lois Lane, Johnathan Kent and Lex Luthor. Each character has drastically different perspectives on the character which all together piece a fascinating character piece, with issue representing a different season of the year. This series is beautifully drawn by Tim Sale and shows off fantastic emotion from each character.

Before Mark Millar made the bigtime with creator-owned series like Kick Ass he was wrote this Elseworlds epic, Superman: Red Son. Essentially premise of the story is what if Superman crashed in the Soviet Union instead of Smallville? How would things be different? Along with this we see a Lex Luthor that has the United States on his side and even a soviet Batman.

If you’re looking for a different take on Superman then this is the story for you. You’ll get a bit more out of this story if you know the basic Superman origin. If you know nothing about it then here’s a quick summary to get you up to speed.

Written by Mark Waid and art by Alex Ross.

Kingdom Come explores a world where Superman has stepped down from super-heroics, setting off a domino effect where most of the Justice League follow suit. In the vaccuum, the new breed of heroes would rise up to be more violent and destructive. It’s not until tragedy strikes ten years later when the Justice League come out of retirement to stop the bloodshed.

The series is mostly told from the perspective of a priest who, thanks to The Spectre, can see the actions of the heroes in a similar manner to that of Charles Dicken’s Christmas Carol. It’s an interesting angle to look at the story, which allows for the conflicting ideals to be commented on and explored – especially when Superman’s ideals are being challenged from every angle.

The comic is beautifully painted by Alex Ross, who fills the page with glorious and expressive figures. His use of colour and lighting make his style have a sense of realism to it, while still having a sense of nostalgia for comics of yesteryear.

This story was told in Kingdom Come #1-4 and is collected in various formats including trade paperback and Absolute edition as Kingdom Come.

For the Man Who Has Everything

Written by Alan Moore and drawn by Dave Gibbons.

Batman, Robin and Wonder Woman visit the Fortress of Solitude for Superman’s birthday and find him in a coma state with an alien plant wrapped around him. It is revealed the Mongul that is responsible and that the plant is feeding Superman dreams of Krypton if it had never been destroyed. The story flashes between what is taking place at the Fortress of Solitude and Superman’s dream.

This issue was adapted into an episode of Justice League Unlimited in 2004.

For the Man Who Has Everything was told in Superman Annual #11 and is collected in trade paperback in Superman: Greatest Stories Ever Told vol. 1.

Whatever Happened to the Man of Tomorrow?

Written by Alan Moore and drawn by Curt Swan and inked by George Perez and Kurt Schaffenberger.

Published in 1986, What Ever Happened to the Man of Tomorrow was the final Superman of the continuity before Crisis on Infinite Earth wiped the slate clean. Seen as an imaginary tale, that may never actually happened, it was a good way to say goodbye to the Silver Age interpretation of Superman before John Byrne would reboot the character.

Superman’s identity is discovered which opened the doors for all of his foes to come and attack him. Once he defeated his rouges gallery Superman decides to retire.

Whatever Happened to the Man of Tomorrow? was told in Superman #432 and Action Comics #583 and is collected in trade paperback in Superman: Greatest Stories Ever Told vol. 1.

Have I missed any Superman stories that should be on this list? Let me know in the comments if you check out any of these stories.